No love for oozing cellulite. And fat shaming...

Several of you who are personal friends of mine knew this would be coming: 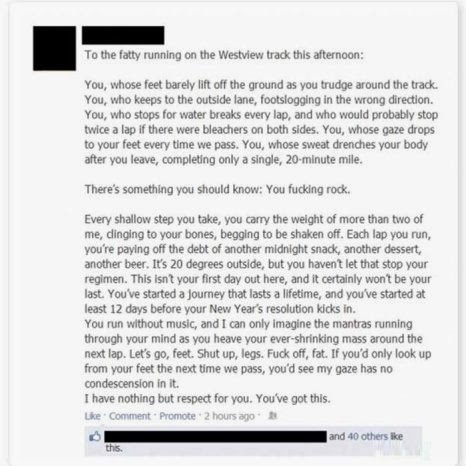 If you are like me and you're starting your journey for the umpteenth time, you fucking rock.

Though I packed on fifteen pounds during my slothful, gluttonous hiatus, I begin again well ahead of where I began last time. As my new trainer has confirmed, I am very strong. He's confident that we'll achieve my goals in no time.

I actually started last Thursday when he put me through an analysis of my strengths, recorded my weight and body fat percentage, discussed my goals, and started developing a daily plan. Our first session was on Friday. It wasn't until today that I could contemplate using my arms. He burned them out like I've never felt before. I reached failure in my triceps - something I don't think I've ever experienced. The soreness didn't get me until Sunday. I spent the next couple days operating like I had some sort of palsy in my arms.

It was ridiculously painful, highly irritating, and the best feeling I've had about myself in five months.

I'm back and I've got this.

I'll be working with this trainer one-on-one every other week. In the mean time, he has a daily workout plan for me to go by and nutritional guidelines he'll be harassing me about. I say harassing me because I've told him explicitly that that is what I am paying him for. "Look," I said, "I operate best with shame. My last trainer knew this about me and never hesitated to let me know when I was sucking. I need that. So please, if you see me phoning it in, you have been hired to let me know in the type of shaming language that I'm sure you think but rarely use."

I'm not at a Crossfit gym anymore. The small town we live in doesn't have one. So I've chosen one of those gyms that has rows and rows of treadmills and ellipticals. They do have free weights so today I returned to my favorite - dead lifts, though the trainer didn't have them programed for me. I followed that with a 5000 meter row.

I have no love affair with my cellulite. In fact we're enemies. I see it there, looking back at me from the mirror...laughing: "I'm baaaaack!" It sneers at me, "Time to get some new clothes, fatty, these don't have room for me anymore."

Little does it know, I do not quit.

So, what made me succumb to eating more than I needed and not exercising? ME. Just me. My very own personal lies, laziness, excuses, and indulgences. I'm like that. It's like I'm a five-year-old performing the vinegar/baking soda volcano experiment over and over again thinking that it might not work this time. But just as the little kid will delight in watching the bubbly liquid expand and flow, I watch as too much food + not enough movement makes my fat multiply. Crazy how that works, huh?

What I do know, though, is that this experiment can be reversed with rewarding results. A disciplined diet + commitment to exercise makes ugly cellulite DIE.

Though I doubt anyone will be stupid enough to wave their fat pride flag on this post, let me say in advance, shut up.

And since I'm a Christian and am supposed to be nice to seek the Truth from His Word I'll leave these here as well:


For many walk, of whom I have told you often, and now tell you even weeping, that they are the enemies of the cross of Christ: whose end is destruction, whose god is their belly, and whose glory is in their shame—who set their mind on earthly things. -Philippians 3:18-19

Beloved, I pray that you may prosper in all things and be in health, just as your soul prospers. For I rejoiced greatly when brethren came and testified of the truth that is in you, just as you walk in the truth. I have no greater joy than to hear that my children walk in truth. -3 John 1:2-3

A foolish woman is clamorous;
She is simple, and knows nothing.
For she sits at the door of her house,
On a seat by the highest places of the city,
To call to those who pass by,
Who go straight on their way:
“Whoever is simple, let him turn in here”;
And as for him who lacks understanding, she says to him,
“Stolen water is sweet,
And bread eaten in secret is pleasant.”
But he does not know that the dead are there,
That her guests are in the depths of hell. -Proverbs 9:13-18


And they shall say to the elders of his city, ‘This son of ours is stubborn and rebellious; he will not obey our voice; he is a glutton and a drunkard.’ -Deuteronomy 21:20

Hear, my son, and be wise;
And guide your heart in the way.

Do not mix with winebibbers,
Or with gluttonous eaters of meat;
For the drunkard and the glutton will come to poverty,
And drowsiness will clothe a man with rags. -Proverbs 23:19-21

Look, this was the iniquity of your sister Sodom: She and her daughter had pride, fullness of food, and abundance of idleness; neither did she strengthen the hand of the poor and needy. And they were haughty and committed abomination before Me; therefore I took them away as I saw fit. -Ezekiel 16:49-50


Posted by SarahsDaughter at 9:22 PM