The definition of insanity

Have you ever known an athlete to cut calories in order to increase performance?

Why...why then was my go to approach to losing weight to cut calories? Why am I even concerned about weight for that matter? Does the scale tell me anything about what I see in the mirror? Does it determine what clothes fit me? Or how much I can dead lift or back squat? Does the scale determine my energy level after an hour and a half of intense training?

Nope, not at all. 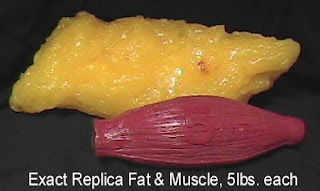 And we all know more muscle equals a higher resting metabolic rate, thus a fat burner in it's own right and...duh, it is much more pleasant to look at in the mirror.

So why did I sabotage my body's ability to develop muscle by cutting the energy it needs to do so?

Because that's what they have always said to do. Because that is what has been stuck in my head all my adult life even though I have read and understood the lunacy of it.

A friend linked a site called Eat to Perform.  I have been reading and devouring every word on their many pages and forum.

My fat percentage results (Bod Pod) from January compared to today prove everything they talk about on their site. In January my body fat percentage was 30.8, today it is 31.6. That's right. After six months of working out 3x's/week (taking a couple weeks off here and there) and cutting calories when I was "being serious about my weight loss," I managed to gain fat. I also gained 1.2 pounds of muscle so my resting metabolic rate has gone up by ~20 calories. (More muscle equals more calories burned while you are at rest).

For the last two weeks I have been working out 5x's/week. Today was the first day I followed the eating advice I found on Eat to Perform. I ate over 100 grams of carbs around my workout and felt a tremendous difference. I felt stronger and didn't experience the after workout drowsiness I had become accustomed to when I was only eating 1200 calories/day (if you've wondered where I've been, I've been sleeping...literally!).

My new goal date is still September 1 - six weeks from now but my goals have changed dramatically. Instead of a weight goal, I will do another body fat analysis to track my progress. I will also be focusing more on my performance at the gym. And though I won't be posting before and after pictures, this testimony is one I hope to have in six weeks. Notice she weighs six pounds more in her "after" picture than in her before picture.
Posted by SarahsDaughter at 8:46 PM