A reader emailed interested in other posts I've written that support my statement and belief that:

Courage is not an innate female trait. Nor is honor or empathy.

In Vires et honestas I stated:

I know not one woman who has always naturally embodied honor. Nor do I know many who truly understand the definition. We presume it is subjective, relative, and circumstantial. This doesn't even make sense to a man. It may be the hardest thing a man can express verbally to you. As difficult as explaining the pain of childbirth, is the ability for a man to explain honor. It is of such value to them that they will even be put off and discouraged to even have to define it. Many believe wrongly that women understand it or even have it as a trait within them.

We don't need to look much further than our current divorce statistics to see the damage inflicted on the family due to women's lack of the virtue honor.  The data shows that with no fault divorce laws, women will break their vows at a much higher incidence than men. When we look at the top reasons given for destroying their marriages one has to wonder what women even think vowing to do something means. Certainly we wouldn't need to make the vow "to have and to hold from this day forward, for better, for worse, for richer, for poorer, in sickness and health, until death do us part" if it were something that was going to be easy to do. It is honor that holds us to these vows when we are faced with the temptation to break them.

Honor is a culture preserving virtue but not necessarily a self-preservation virtue. It involves sacrifice of will. Women, by their biological nature, are the more self-preserving sex. The rise of feminism has clearly demonstrated that women are prone to exerting their will, regardless of cultural, moral, and spiritual implications, when given the choice and opportunity to do so rather than sacrificing their will, as seen in the divorce statistics.

This isn't to say that all men possess the virtue of honor or that no women do. In fact as we continue down this course of high divorce rates, broken homes, and churches who have strayed from teaching Truth, we are witnessing more men consciously abandoning honor as a virtue and replacing it with self preservation and other dyscivic behaviors.


It is increasingly common among Millennials to dismiss religion, God, churches, authority and tradition.


Perhaps the biggest transition of all is the entry of millions of women into the skeptic ranks. In 1993 only 16 percent of atheists and agnostics were women. By 2013 that figure had nearly tripled to 43 percent. This enormous increase is not because the number of skeptic men has declined. In fact, men’s numbers have steadily increased over the last two decades—but not nearly as rapidly as among women.

Empathy - the experience of understanding another person's condition from their perspective. You place yourself in their shoes and feel what they are feeling.

If what we observe with women can be called empathy, then we must also recognize that it is very fluid. Generally she'll feel empathetic for others within her social group and only when she is positively correlated with the members of that group. That empathy wanes considerably at the first signs she's is being outed from the group. Is it possible to even call it empathy then?

If empathy is conditional and can be withdrawn due to negative feelings, it really ought to be called what it is - approval and agreement. She agrees with how a person feels because she would feel that way too, in that moment, in those circumstances, with that particular person. She approves of that condition. In other words, it's an expression of solipsism.

How many times have you witnessed women assume the motivations of another individual without evidence. Again, this is not empathy, it's also not likely to be psychic ability, it is psychological projection - another expression of solipsism.

This "assuming the motivations" is rampant in feminist theory and the feminist mindset. Their reactions to Truth as found in the Bible or in the writings of great philosophers is based on assuming their motivations, and being wrong in doing so. What they claim to be misogyny and men's need for control and a devaluation of women couldn't be further from the truth. We see evidence of this being projection now that our society has abandoned heeding the advice of the civilization minded philosophers and Apostles and has welcomed women into the public arena with their unusual and illogical expressions of "empathy":

Women have always been the primary victims of war. Women lose their husbands, their fathers, their sons in combat. Women often have to flee from the only homes they have ever known. Women are often the refugees from conflict and sometimes, more frequently in today’s warfare, victims. Women are often left with the responsibility, alone, of raising the children.- Hillary Clinton

Because being dead is not having been the primary victim?

"Many of you are well enough off that ... the tax cuts may have helped you," Sen. Clinton said. "We're saying that for America to get back on track, we're probably going to cut that short and not give it to you. We're going to take things away from you on behalf of the common good."

Where is the empathy for those who will have these things taken from them?

The evidence that it was projection that was the foundation of feminism and assumed motivations of those who are civilization minded could not be expressed better than this: 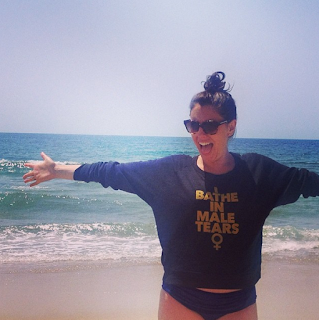 Everyday we witness the fall out of feminism:
Health problems in single moms
Psychological repercussions from having an abortion
Lesbian partner violence
Work related stress, injury, and other disorders for women
The rise of SSRI use in women

And finally, the most ignored inconvenient truth - the decline of female happiness.

When the overwhelming evidence is that feminism is harmful to women, we can conclude that the opposite of feminist philosophy is one of tremendous empathy for women. The instruction in the Bible and the writings of men like Aristotle are vindicated in being compassionate, benevolent, rational, and reasoned protection of women. Quite the opposite of misogyny.

Further evidence of the lack of empathy in women is found in two of their greatest weaknesses - the sin of coveting and proclivity to gossip. Two behaviors that, if you have daughters, you would do well to root out at every sign and expression of them. Don't let them gossip about other people. Correct them when you see them longing for something someone else has.

Courage is intricately involved in the virtue of honor and I will write more on it at a later time.
Posted by SarahsDaughter at 9:04 AM