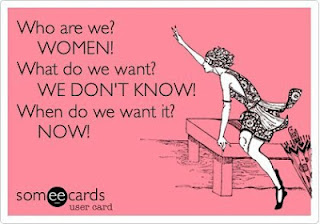 This e-card a friend posted is one of my favorites I've seen. It made me actually chortle. It also made me think of several things we women think we want, receive it, and respond negatively to it. What frustration we must serve up to our husbands.

Ever heard this one: "A woman wants to be validated?"

I remember reading that in a marriage book and thinking to myself, "yeah, that sounds nice, I do want to be validated. He should know this, this is what I want." And I, like thousands of other women reading the same thing, went right up to my husband and instructed him on what he needs to do in order to make me happy. Now notice, this isn't something that was instinctual to me, I had to be told from a good idea fairy, in this case the book I was reading, what it is that I want. It's really nice that men are not complicated and know precisely what they want and can verbalize it quite clearly.

RLB, like thousands of other husbands who received this instruction, probably shared the same thought, "now, how the hell am I supposed to validate batshit crazy?"

After I wrote, Dog Joy, I had a conversation with our daughters about the difference between males and females in how they overreact. Think of a number line that extends from negative ten to positive ten. I explained that it is in the positive direction that boys overreact. My son will have the same tail wagging, visual joy if I make him some bacon before school as he did when RLB told him he gets to pick the shot gun of his choice for his 16th birthday. You wouldn't think the two stimuli would induce the same reaction (okay, the reaction to the gun lasted much longer) but no one would question him because these reactions are on the positive spectrum. We know happiness and joy are healthy emotions, it matters little how they are derived in someone's spirit.

Think also about what makes you laugh. In order for me to literally laugh out loud, I need to find something extraordinarily funny. RLB out laughs us all in this house with our son following in close second. The same is true in what they find "totally awesome!" They are very loud individuals to watch movies with.

Females overreact in the negative direction on that number line. In explaining it to our daughters, it was easy for them to realize due to a very recent event. I delivered bad news that they were going to miss a swim practice. You'd have thought I replaced the word Christmas for swim practice. Their faces were forlorn, and their mannerisms were indignant. They were visibly upset and overly emotional about missing one and a half hours of swimming.

I helped them understand that I do it too. Fortunately, I've learned to recognize it in most cases before allowing my reaction to affect others. However there were plenty of times early on in our marriage when RLB was quite confused as to how one slight from a friend or family member or a misunderstanding between us could send me into a tailspin of negative emotion. Should he experience the very same stimuli, his response would have been around a negative two ("eh, oh well") whereas mine was negative eight (OMG!!!!!).

Returning to this idea that a woman wants her feelings validated, you can understand, as men do, how ludicrous it would be for them to validate (establish the soundness of; corroborate) these over the top negative emotions. Is the idea that this is what women want even true?

You don't really want your husband to see you happy and gush, "something has given you happiness, I see that, and you are right to be happy." - puke! It really is our negative emotions this pop psych statement is referring to, isn't it? However, if RLB were to say to me, "I can see you are experiencing anger/sadness, you are right to be feeling this way, I understand," it would not conjure up warm fuzzies in me about him. Actually, the opposite would happen especially once I got over my own damn self and saw my overreaction for what it was. I would know he was not being honest with me, or he is becoming effeminate. Neither of which are helpful in our marriage relationship.

Women want leadership. Even when they can't express it, they respond positively to it. I need RLB to let me know when my emotions are irrational. By telling me the truth, he protects me and others from me making rash decisions and harming relationships. He also protects my well being as we know negative emotions are unhealthy for us.

When negative stimuli threaten to cause us to overreact, we should stop and ask our husbands, "how would you respond to this?" And then submit to his judgement of the situation. If, on the scale of negative emotions, his reaction would be more positive, take time to pray and settle down before reacting to the stimulus. It becomes easier over time. There really isn't much that shakes RLB's tree. Being able to emulate this stability has been very good for us and the harmony of our home.

Posted by SarahsDaughter at 9:00 AM