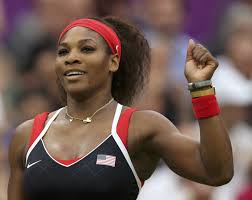 Serena Williams is fascinating to me. You'll see a lot of this 31 year old reigning tennis champ in the news over the next few days and the reason for it is ridiculous.

Because MPAI (Most People Are Idiots), they'll not actually read Rolling Stone's interview with her.  Instead the hand waving and feminist attack machine will blather on and on about how insensitive she is. How dare she say what she said! She's a role model!

Her mindhurt/feelbad crime? She has an opinion and dared express it. From the piece:


We watch the news for a while, and the infamous Steubenville rape case flashes on the TV – two high school football players raped a drunk 16-year-old, while other students watched and texted details of the crime. Serena just shakes her head. "Do you think it was fair, what they got? They did something stupid, but I don't know. I'm not blaming the girl, but if you're a 16-year-old and you're drunk like that, your parents should teach you: Don't take drinks from other people. She's 16, why was she that drunk where she doesn't remember? It could have been much worse. She's lucky. Obviously, I don't know, maybe she wasn't a virgin, but she shouldn't have put herself in that position, unless they slipped her something, then that's different."

She has the same opinion I do so it will be impossible for me to get the vapors from her opining on the situation. I'm a proponent for teaching teens the effects of alcohol, the avoidance of risky behavior, and the necessity of always having a designated thinker with them during all social interactions where drinking is involved.

So we'll hear the cries that she's blaming the victim, she's insensitive, a rape enabler, and the herd will cast her out - Banished!

Though she may be pressured to recant her position, I won't believe it. I don't think Serena cares what the herd has to say, and for that, I adore her.

As a woman, she has a logical perspective and understands that she can not "have it all":


"I've thought it would be cool to have a baby young," says Serena. "You know, be my road dog – like my dogs, they travel the world – but there's always something you have to give up for success. Everything comes at a cost. Just what are you willing to pay for it?"[...]

"I had a panic attack," she says with a shiver. "I was like, 'I have no idea what I'm going to do next.' "
Then there's the whole kids thing. She's only 31, but she can hear the clock ticking.
"I've seriously thought of freezing my eggs – no joke. I've thought about it, but with all the drug testing, if you do that, then you can test positive or something. Maybe I'll check into it again."

She has also gotten over the fact that life is not fair. She's never going to be a size 2:

"I had to get comfortable with knowing that one of my weaknesses was my weight," says Serena, eating a sandwich with no cinnamon-bun chaser. "Especially growing up with Venus, who's so tall and slim and model-like, and me, I'm thick and hips and everything." A teenager comes over for a picture with her, and Serena poses and then continues. "I used to feel like I wanted to be her. I wanted to be thin, but it wasn't me, so I had to learn that I'm going to have larger boobs. I'm going to be bigger, and just enjoy that. So I think it's good for a lot of other girls who are curvy or more bodacious to be confident in themselves."

She's fully aware her mood swings and outburst can negatively affect her game.

There's been an uneasy truce between the many faces of Serena for two years. Serena followed her 2009 U.S. Open outburst with another one in 2011, when she accused a chair judge of being "the one who screwed me last time." (She wasn't.) Serena knows she doesn't play best out-of-control angry and talks frankly about what it has cost her. When we met, she had won the French Open only once, and she blamed near misses on her psyche.
"I've choked a lot there," she says. "I should have won a few years ago. Just not playing well when the pressure is on. I just get too far ahead of myself, and I crumble."

And she's no advocate for big government. She knows first hand what our welfare state and culture of violence has wrought:

Serena's Hannity-like take on the case isn't her only rightward lean. She is baffled by the tax rate in France. "Seventy-five percent doesn't seem legal. Nobody does anything because the government pays you to be broke. So why work?"
Agree or disagree, Serena's no-­safety-net political philosophy is rooted in her Compton childhood, one where there wasn't a lot of money and where gun violence claimed her older sister Yetunde in 2003. Today, Serena mother-hens every expenditure. "I'm an athlete and I'm black, and a lot of black athletes go broke. I do not want to become a statistic, so maybe I overcompensate. But I'm paranoid. Oprah told me a long time ago, 'You sign every check. Never let anyone sign any checks.' "

Press on Serena! Don't cave to the herd! And, go get number 6 at Wimbledon next week - I may even watch this year.
Posted by SarahsDaughter at 8:38 AM