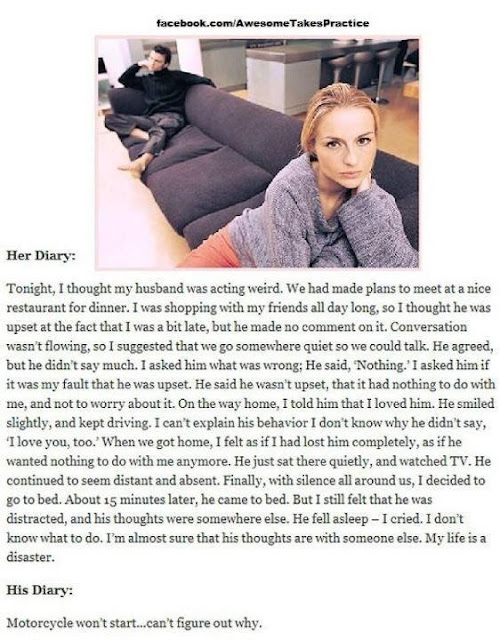 That's one of the things that is so great about guys. They're not that complicated. It's a good thing, too. The monthly hormonal and emotional changes we women go through is complicated enough.

When men are hungry, they want to eat good food.

When men are tired, they want to sleep.

I've told RLB many times how I envy the fact that he wakes up in relatively the same mood every day. If something is going to disrupt that harmonious mood he's in, I don't want it to be me or something I can control.

There are several examples I could list of how to keep your home in a state of harmony that your husband would love. The overall principle is this: prioritize him first and remove obstacles and challenges that distract from his mission. Most men have as their mission the ability to provide. He can accomplish this best when he doesn't have to concern himself with 1001 other things that have nothing to do with providing.

Food first. The less time he has to think about what he's going to eat and where he's going to get it, the better. The quality and convenience of the food is going to depend on your income level but no matter how much money you have, you can do this for him. This very simple priority will contribute to maintaining that harmonious mood in your husband. It's not a cliché. If you don't know how to cook, learn. If you don't know what he likes to eat, ask.

Sleep/rest/relaxation. Just because he is lying on the couch staring at the television, playing a video game, or reading something online does not mean he is available. You're not his mother, he left her to live an adult life in his own home. There is never a good time to nag. One of the most important things that needs to exist in his home is refuge and sanctuary. There's really only one way to properly say this: leave him alone and shut up.

Sex. It's not complicated. It's not a secret. He wants to have sex. RLB's mother told me this when we were first married: "Don't ever use sex as a weapon." - valuable advice from a wise woman who has been married for over 50 years. Another valuable bit of wisdom I've learned along the way is to be the best looking woman he sees during his day.

Again, it's not complicated. If it is your desire to have a successful marriage do these things first: keep your husband well fed, well rested, and well sexed.
Posted by SarahsDaughter at 8:08 AM