It's been my observation when women attempt to compete with men, they generally lose unless a handicap is used (like feminist judges for example - a whole different topic). There is a notable exception to this, however, and that is in bad behavior: 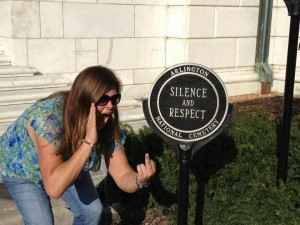 In her apology she writes, "We realize that it was an ignorant and distasteful thing for us to do..."

Definition of ignorant:  lacking knowledge or awareness in general; uneducated or unsophisticated.

That just tickles me. Especially after someone attempts to challenge my assertion that women are not  born with an innate sense of honor. Oh, I know, it's just an anecdote and most women would never do this.

There's a saying RLB loves to use when one of our children does something stupid. He looks at me, shakes his head and repeats in a low, animated game show host voice, "You're only as successful as your dumbest kid... RLB, you have two rocket scientists and one hopeless drug addict, you sir, will be remembered as the hopeless drug addict's father. Congratulations!"

There are so many things decades of feminism has brought (millions of dead babies, horrible divorce rate etc...) however this sums it up perfectly. Congratulations feminists, you will be remembered by Miss Stone.
Posted by SarahsDaughter at 6:51 AM