Leader of the pack

About a year before my mother died she got a cat for a companion. Dolly was a beautiful, long haired, calico. She became my cat after my mother died and later RLB and our children's cat. When she was around twelve years old, RLB thought it'd be a good idea to get a hamster. That way our kids would be able to experience a smaller pet's life and death before having Dolly the cat die.

The hamster, Rocky, seemed to bring out the wild in Dolly as she became a hunter shortly after Rocky arrived. In her old age, with only hind claws, she would bring home mice, chipmunks, and rabbits. One mouse was regurgitated at the foot of the hamster's cage. We're unsure if that was a gift or a warning. When she brought home the rabbit she separated its head and stood with the headless body at the doorstep until someone would open the door to see the evidence of her awesomeness.

The plan, to have our children experience a pet's death, failed. RLB joined the Army and was stationed first in South Korea. The fifteen-year-old cat and three-year-old hamster would have to go live with my sister when we moved. Though our children would miss their pets, they missed their father much more. We hadn't lived with him for six months and he went on to Korea a month before we did.

While we were in Korea, the hamster did eventually die. But, we were unable to have our planned little kid pet funeral for it. Shortly after we got to Korea, we were at a carnival where our daughter won a couple of gold fish. And again, when it was time to move back to the States, we had to give the gold fish to some friends. There would be no little kid gold fish funeral either.

Dolly waited until we returned from Korea to die. She was sixteen when we visited her last. She had become my sister's cat at that point, it wouldn't have been right to move her with us. She'd become frail, had lost all of her weight and her teeth. My sister was unable to make a decision to put the cat down to alleviate her suffering. We said goodbye to her that last visit and received a call a couple of days later that she had died.

Once we settled in at our Stateside duty station RLB allowed us to start collecting pets. First was Bob, the basset hound. Then Tommy, a thirteen-year-old, large tabby cat whose owner had become allergic to him. We bought a house and RLB agreed to getting Bob a friend to play with (Tommy didn't like to play with Bob). He bought Betty, another basset hound. Our daughters again wanted a couple of rodents so RLB bought a cage that came with a couple of hamsters.

Last summer a dumped kitten showed up in our garage. The girls and I begged RLB to keep him. He agreed but the cat would be an outdoor cat whose job it would be to take care of the mice. This cat, Odie, has become RLB's killer cat who is doing a fine job earning his keep. However, the only human he likes is RLB. He hates me. I can't even touch the damn thing without it biting or clawing me. The girls desperately want Odie to love them. They bring him in the house on occasion to cuddle until his lack of indoor etiquette gets too offensive. He yells at them, scratches and bites, bites the other pets, and gets returned to his home in the garage. RLB gets quite the kick out of this cat who jumps up in his lap and purrs and cuddles. All the rest of us get from him are glares and hisses. But it is pretty entertaining when he brings back his latest kill. Hopefully we'll have fewer snakes now that we have RLB's killer taking care of the mice.

In February one of the hamsters died. Finally, we had our first not-so-little kid funeral for a pet. Over the last month Tommy went through some significant changes. He just turned sixteen and was starting to lose weight rapidly. His legs were getting stiff and weak under him and occasionally he'd miss when he'd attempt to jump. Also, he was eliminating around the house, unable to make it back to his litter box. He was showing signs of becoming increasingly disoriented.

We started to discuss euthanizing Tommy. Each time our daughters would cry and plead for his life. Each time someone would discover where Tommy had peed, the girls would plead, "it's okay, we can clean it up, please don't kill Tommy." I struggled with this and vacillated back and forth in my mind. Though it was obvious Tommy's health was not going to improve and that any amount of treatment would not prolong his life substantially. He was sixteen. He was elderly. It was time. Thankfully, I am not the decision maker of this home.

When the decision was made, it was final. RLB did not vacillate. It was the most humane choice and it was his responsibility to make. The girls and I took pictures of Tommy, pet and loved on him one last time and said goodbye. RLB and our son took the cat and proceeded to do what I, as a woman, am far too weak to do.

The guys came back into the house to get us so that we could participate in Tommy's burial. He was already wrapped peacefully in a blanket and lowered into his grave. Later the girls made a headstone for him. There were some tears and hugs but later as we played games at the kitchen table, we laughed, made some "too soon" jokes, cried a little more, talked about Tommy's silliness and how much we'll miss him.

RLB noted later how well the girls handled the events of the day. I know why. We're girls. One of our most significant needs is the need to be led. We need to have decisions made definitively for us. When that happens, we can be calm. Women have an extraordinary ability to weather any storm, if there is certainty. Indecision, uncertainty, vacillation, and a lack of assuredness are what causes insecurity, fretfulness, and emotional turmoil in a woman. This is all clear evidence to me that God's commands for the natural order of a household are for our benefit. 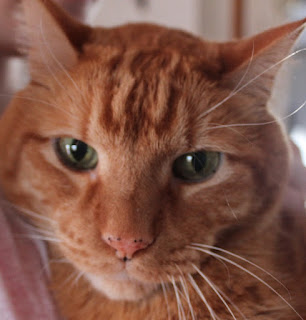 Posted by SarahsDaughter at 10:56 AM