"Me love you long time"

As is very common for soldiers in the Army, RLB's first set of orders were for South Korea. He was enlisted and would be going to his first unit as a Private First Class (E3). I had heard of other families following their soldiers to South Korea and got busy finding out all that I would need to do to relocate our three children and me. We wouldn't be sponsored by the Army to do this so every expense would be from out of pocket and all the information I'd need would have to be found on my own.

One month into his assignment there, RLB was meeting us at the Incheon International Airport. We were on our way to what would become a life changing journey. We stayed in a small hotel on the Army Post RLB was living for ten days while I set out to find an apartment and furnishings for it. There were several Americans already there that were willing to help me. I also met a Korean woman who would become a dear friend and helper for our family.

We lived in the city of Dongducheon in a 600 square foot apartment on the fifteenth floor. While our amenities were nil, but for an American bathroom and heat, our view was breathtaking. 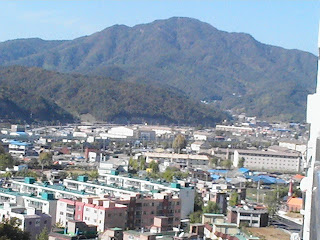 I could write volumes on our experiences in South Korea. It was an adventure that taught me so much having been raised a spoiled American who had never left the United States. But my purpose with this essay is to implore the American women reading it to start researching, reading, and viewing videos of other places in the world. Not tourist videos either. Immerse yourself in videos offered by The Vice Guide to Travel. You'll find their guide to Liberia through the link.

In no way do I encourage you to want to "go there to help." There is no place for a woman in missionary work in these places of the world that the Vice Guide covers. I will never condone the sending of women to these or many other countries. I'll have a lot more to say on the Missionary Industry in a different essay.

I want you to watch these videos and read books and articles on these places for one purpose:  to look around your life and hit your knees in thanksgiving and gratitude for where you are. To get over yourself and the issues you whine about. To release your entitled mentality and prudish disposition. You've been coddled and protected. You've lived a very cozy life and are ignorant to what life entails for the majority of the world. Not one complaint should fall from your lips of what you do not have. I don't suggest that I have even fully grasped the measure of blessing I have in my life. I purposefully continue to watch these videos and read books so that I may always remain in awe of the provision and safety in which I live.

Back to South Korea.

While vastly different than the U.S., Korea is a first world nation. Where we lived, while it was safe, what was deemed normal and average in affluence was very different than an American's experience. The first reality is the smell. We live in a very fresh smelling country here in the U.S. It took some adjustment to smelling sewage where ever we went. The second eye opener was how tight and crowded all of the shops and businesses were. And the third eye opener was wherever we went, we saw Filipinas...Pinay...girls from the Philippines.

Quickly Americans learn the stories. This is the first hand account I learned from my new Filipina friends:

The Feminist movement of South Korea drove girls into education and pursuit of careers. No longer satisfied with being a farmer's wife, the women of the northern cities moved south to Seoul. The Korean women were also no longer available to work in the bars that serviced the U.S. Military. The men in the north, in need of wives, found that some women, starving in the Philippines, would marry them, bear children, and help with their farms and businesses. The bar owners learned these girls could replace the Korean woman who used to earn them money prostituting themselves to American Soldiers. Many industrious Koreans have made it their business to get these Filipinas into the country. This industry has moved beyond the Philippines into Ukraine and Russia.

Parents of young girls in the Philippines will be approached by bar owners (or other go betweens) from Korea. The girls are told they are desired in Korea to sing or play instruments, to perform or dance. Some of the parents know the truth, others fall for the lie. Either way the girls are wooed to go to Korea for a chance to make it in life. To leave behind the ghetto they've been struggling to survive in.

They are brought to the bar and are made aware that the owner now owns them. They have a contract that has to be paid off before they can go free. I've heard this contract can range from $3000 - $30,000. The manner in which they pay off this contract is up to them. They are required to be "juicy girls" other wise termed "drinky girls." They are scantily clad and offer the service of paying attention to a man who is willing to buy them a $20 glass of juice. Often time there is a quota of juices to be sold first before her profits will go towards her contract. Soon enough these girls learn the way to pay that contract off faster is to offer a larger range of services beyond just sitting next a man and paying attention to him. Some of the girls get hooked on this life and will remain at the bar even after the contract is paid off. Many are in search of a man willing to pay off  her entire contract for her so that she may go free.

When they aren't working, they often live above the bar in small rooms shared with many girls. Many of the bars have barbed wire fences along the edges of the roof and the girls are fed meager amounts of noodles.

As a family, we would walk through "The Ville" where these bars are intermingled with other shops, and food stands. The girls, dressed as prostitutes, hang out by the doors luring men to come on in. Our children would ask why these girls only have underwear on. Our children were very popular with the girls. They would surround them and touch their hair, "oh babies - so beautiful!" I received tremendous respect from the girls. Other American women, I've heard, were treated with contempt - a married soldier with his wife with him is a lost customer. It may have been from the treatment the Americans gave these girls. I understood what their job was, I knew how they arrived there. I couldn't help but smile warmly at them with a motherly understanding. 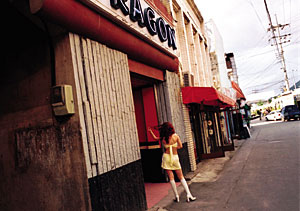 This picture is from a website I found: ROK drop. Click this link for many more pictures and descriptions of the area we lived.

I got to know one girl who had been freed from her contract, Belinda. She was pregnant and abandoned by the father. She stayed in Korea illegally to work at an ice cream shop. Belinda planned to send her baby back to her mother in the Philippines while she remained in Korea. The $600/month she made was enough to support her family back home and pay her way in Korea (in terrible living conditions).

The whole situation is perplexing. Is it a sex trade/human trafficking? Yes. Do the girls end up with better potentials in life? Most of the time, yes. I've known many soldiers with successful marriages to these girls. I've also known many soldiers who have been taken advantage of financially. The individual stories are what I am most interested in. Individual women, with an experience most of us American women will never know. Beautiful children of God. And testimonies that render our complaints in life, pathetic.

Search the web. The realities of our world are right at your fingertips. When you feel that something in your life is unjust, when you're not feeling happy, please take time to watch videos like this one to gather some perspective. Look around your home and let go of your unhappiness, let go of that which you covet. You are blessed. Give thanks to God for the amazing life you've been given and let that joy overwhelm you and your relationship with your husband.
Posted by SarahsDaughter at 10:09 AM